A mammoth discovery in rural Iowa

In 2010, an Oskaloosa man and his sons discovered part of an Ice Age mammoth skeleton while hunting for berries on their land. "I got down on my hands and knees on the bank and I could see a marrow line around the edge and I said boys, that's a bone, that's a really big bone," says John. It was an entire mammoth femur, intact.  The knee joint of the femur is the size of a soccer ball. But the femur was just the start of what they'd find, and the bones are just the beginning of a look back into what life was like in Southeast Iowa 12,000 years ago.

In the next two years John dug where he originally found the femur and uncovered nearly 20 other bones, including ribs, five articulated cervical vertebrae, and an assortment of terminal phalanges. He enlisted the help of the University of Iowa Museum of Natural History to lead a continued excavation, which lasted for several more years and involved multiple partner institutions and hundreds of volunteers. 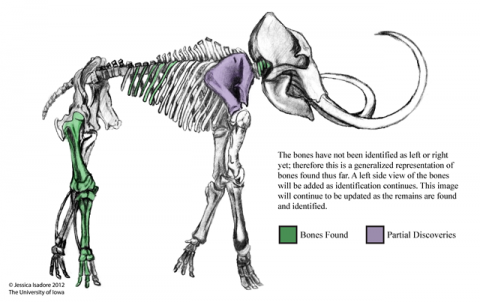 As of 2015 the site is thought to contain parts of at least three woolly mammoths, none of them complete. Initially, experts thought some of the mammoths were a different species, the Columbian mammoth, which was the species thought most likely to be found in Iowa.  But examination of the teeth suggests that all the individuals are the smaller woolly mammoths.  The number of bones, the presence of large and small bones together, the fact that the site contains multiple mammoths, and even details like toothmarks on bones all make the Mahaska County excavation of great interest to paleontologists.  Along with the mammoth bones, teeth, and tusks, scientists are studying soil and plant materials from the site, all of which can help tell researchers what the mammoths' environment was like and how they lived. 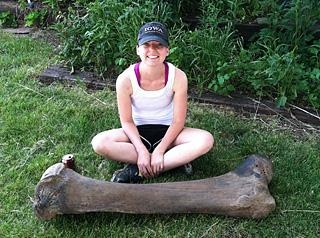 “The discovery is a benefit for the Museum of Natural History because the landowner has donated the science associated with the beast. We will be able to test the bones for carbon, nitrogen and oxygen isotopes. This data will give insight into the temperature of the water the animal drank, the kinds of plants it ate, and date the time of death, probably within 50 years,” says Holmes Semken, UI emeritus professor of geoscience. "We would like to know how the mammoth died, but the museum scientists are most interested in how mammoths lived. The Oskaloosa specimens will provide a wealth of information."

The excavation is now being managed by the Mahaska County Conservation Board.