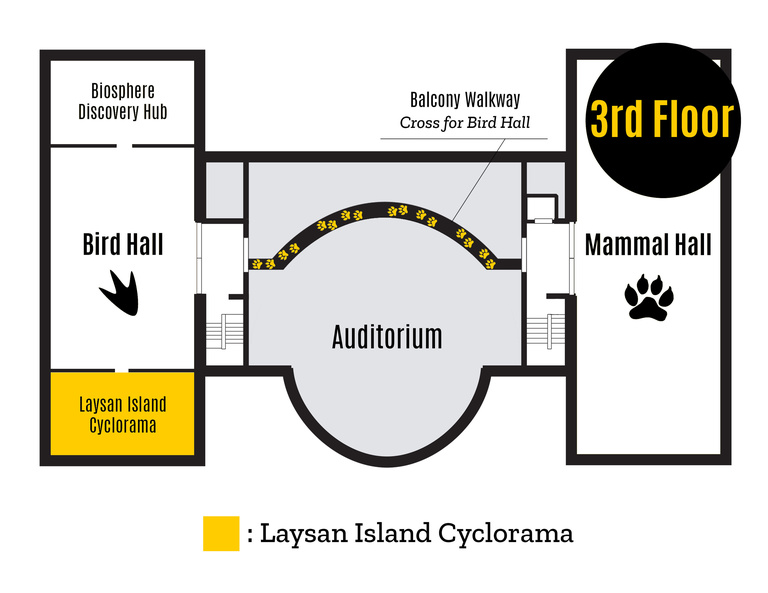 The century-old Laysan Island Cyclorama offers a 360-degree view of Laysan, an outpost of the Hawaiian atoll and a bird sanctuary, at its heyday, when it boasted 8 million birds of 22 different species in 1.5 square miles.

In 1902 Charles Nutting, director of the UI Museum of Natural History, first traveled to Laysan as a scientific advisor to a government expedition. He was so inspired by the multitudes of terns, albatrosses, finches, boobies, and other birds that he vowed to re-create the scene in Iowa City. Nutting led the UI in a nine-year fundraising campaign. Laysan frequently made headlines in The Daily Iowan. In 1909, the football team even performed a skit at a lecture on Hawaii to raise funds for the trip. In 1911, Nutting sent Homer Dill, who managed the museum’s bird and mammal collections, along with UI students Horace Young and Clarence Albrecht and muralist Charles Corwin back to Laysan to gather specimens for an exhibit.

The party found the island very different from the paradise Nutting had described almost a decade earlier. In addition to evidence of feather poaching, rabbits introduced by a guano miner in 1903 had overwhelmed the island, stripping it of its vegetation and decimating insect populations. Lacking food and shelter, some seabirds took flight to other islands, but land birds were unable to fly the long distances to other islands.

Despite this, Dill returned to Iowa City with 36 large crates of specimens, including plants and sand. Museum studies students handcrafted thousands of wax leaves for the display, and Corwin painted a 138-foot-long backdrop. When it opened, the cyclorama was one of the first in the world to feature a natural theme and is one of a handful of cycloramas still existing today.

In 1912, UI sophomore Alfred Bailey returned to the island, but ran out of poison and ammunition, barely affecting the rabbit population. In 1923 the Tanager Expedition killed the last of the rabbits on Laysan Island — too late for the Laysan rail, Laysan honeycreeper and Laysan millerbird, which went extinct due to the devastation. Two more species, the Laysan finch and the Laysan duck, remain endangered. All of these species are featured in the Cyclorama.

No major modifications have been made to the cyclorama, but renovations in the early 2000s included the addition of interpretive signs and a soundtrack of bird calls of all 22 living and extinct species that have inhabited the island. While museum staff have hand-cleaned parts of the background mural, no major conservation work has been done.

A 2003 grant funded a conservation assessment, and the museum, with the support of the Iowa City Bird Club, held several fundraising efforts to finance the work that needs to be done.

In 2019, the UI Museum of Natural History became a member of the International Panorama Council, with director Liz Crooks representing the Laysan Island Cyclorama at annual conferences with peers around the world.

In 2022, the University of Iowa Center for Advancement published a far-reaching story, beginning fundraising efforts for conservation. 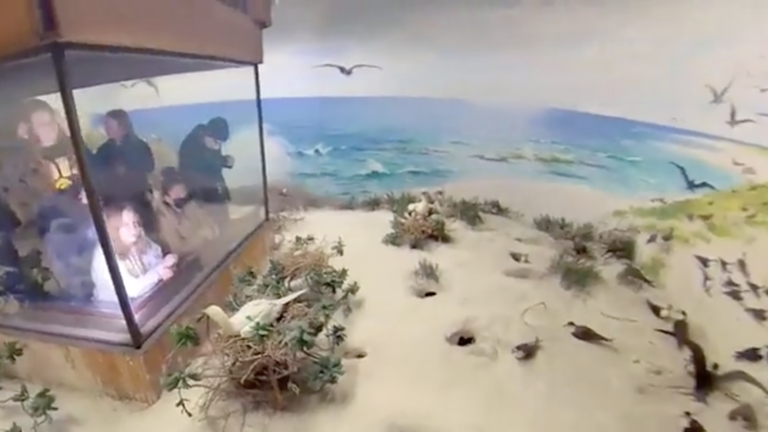