About 10,000 years ago, three giant sloths died in what is now southwest Iowa...

The first, an adult Megalonyx jeffersoni, or Jefferson's giant ground sloth, was discovered in 2001. The second, a juvenile specimen of the same species was discovered in the spring of 2006. In November 2006 the remains of a third, even smaller individual were found. Now teams at the University of Iowa, and across the country, are investigating to confirm that this was a mother and her babies, the first sloth family of its kind ever found, and discover what the Ice Age environment was like and why they died.

Working like crime scene investigators, teams at the University of Iowa are analyzing evidence found at the scene, including the bones and soil samples containing fossils of pollen, micromammals and vegetation. 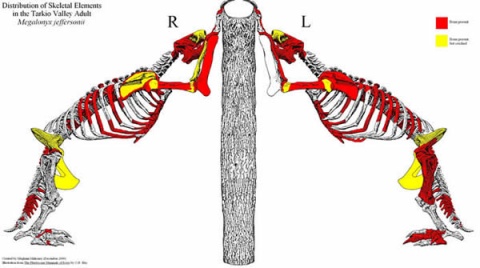